Mahatma Gandhi was a great leader, a practical philosopher and an educational thinker of great repute. He wanted  to establish a caste-less society free of all exploitation and racial discrimination. He used education as an instrument to achieve this purpose. His philosophy of education was an outcome of long experience of political, social and economic life of the country. 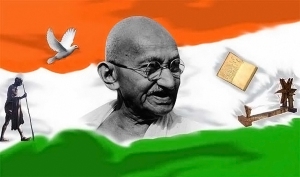 Gandhi’s philosophy of life is a combination of Idealism, Naturalism and pragmatism. Some of his philosophical ideals are given below:

Like every great philosopher, Gandhi also tried to translate his philosophy into practice As a true philosopher, he could not help being an educator. His object was to realize his ideal of a spiritual society as a stepping stone to the realization of Cod be truth.

On the other hand it is critical educational thinking based on philosophy, biology and sociology, It formulates educational aims and objectives clearly, thus determining the methodology, plan of organisation and choice of subject-matter. To Gandhiji, education is a potent force for social reconstruction. It is an activity which is necessary for social, moral, political and economic progress.

Gandhi was an idealist, a pragmatist and a naturalist. On the basis of his background, he gives the meaning of education as; “By education, I mean an all-round drawing of the best in child and man-body, mind and spirit. Literacy is not which can educate man and woman.” His conception of education stands for harmonious development of all aspects of human personality-Physical, Intellectual and Spiritual and so on.

Aims of Education According to Gandhi

Curriculum and Gandhi’s Scheme of Education

Gandhiji devised a scheme of education which is known as “Basic scheme of Education”. Its curriculum is activity-centered. He suggested the following subjects to be included in the curriculum:

Gandhi wanted to brings a silent social revolution through a balanced curriculum as described above. This will encourage self-activity rather than rote memory on the part of the pupils. Inclusion of basic crafts which make it unique and work-oriented curriculum.

Gandhi and Methods of Teaching

Gandhi taught his own children for sometime. From his teaching, he experienced that the essence of good teaching is stimulating the energy of children. In this way, the learning would take place in a natural way and lead the children towards harmonious development. In fact, Basic Education is a technique of teaching in itself. It has recognized the main contribution of science of pedagogy. Gandhiji recommended the following methods of teaching.

In short, Gandhiji stressed on the principle of co-operative activity, planning, initiative and individual responsibility in learning/education.

Concept of Discipline and Gandhi

Gandhiji thought that the highest form of discipline came through self-control and self-discipline. Discipline is based on discipline of mind, thought and action. It is inner discipline which is more important.It springs from within. Therefore like naturalists, Gandhi also advocated freedom for the child. His concept of discipline was in time  with social discipline. Main aim of education is to make pupils the useful and responsible citizens of their country. Thus, Gandhi gave us the concept ‘voluntary discipline’  which is a synthesis between freedom and strict control.

Gandhiji was a great teacher himself. He wanted right type of teachers who are dedication to their profession. They are ready to serve the illiterate masses. Teachers are responsible for shaping the personalities of their students. Therefore, they must be well-trained men of knowledge, enthusiasm, faith and committed to the profession of teaching pupils. They must also be men of high character and nationalist in outlook.

Other Aspects of Gandhi’s Educational Philosophy

Gandhiji believed that  education should enable each individual child to exercise his rights and duties intelligently. ‘The craft-centered education will enable the citizen to repay society for all the rights confessed on him in the form of of some productive service’. His basic scheme of education aims at turning out useful productive citizens rather than parasites whose attitude towards work is unhealthy.

Other aspects of Gandhi’s educational philosophy are free and compulsory education for 7 years and the emphasis on mother-tongue to be used as medium of instruction. Both these aspects need to be appreciated because they will help in realising the objectives of education as laid down by Gandhiji.