The Employees’ State Insurance Act, 1948 provide for certain benefits to   employees in case of sickness maternity and “employment injury” and to make provision for certain other matters in relation thereto. 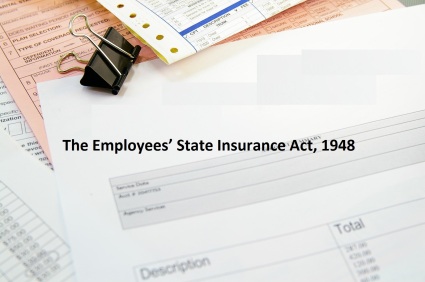 Applicability of the Act:

Under Section 1(4) of the Act, the implementation of the scheme is territorial. The Act applies in the first instance to all factories (as per Factory Act 1948) or is being gradually extended, under Section 1(5) of the Act to cover:

The Act, however, does not apply to a mine or railway running shed, and specified seasonal factories. The State Government may extend the provisions of the Act to cover other establishments or class of establishments, industrial, commercial, agricultural or otherwise, in consultation with the Corporation and with the approval of the Central Government, after giving six months’ notice of its intention to do so in the Official Gazette.

Definitions of the Employee and Wages under the Act:

Employee: The term “employee” as defined under Section 2(9) of the Act, refers to any person employed on wages in, or in connection with, the work of a factory or establishment to which this Act applies.