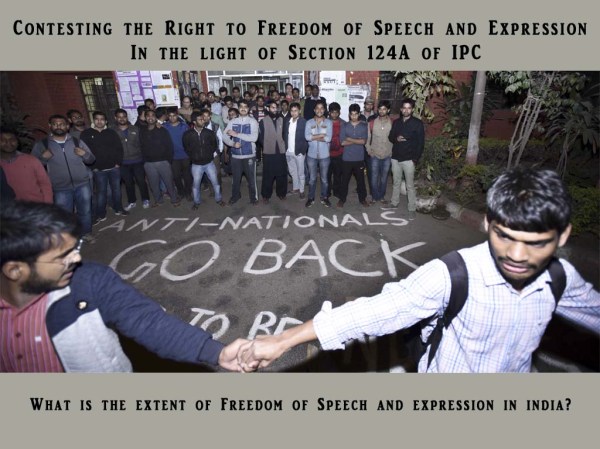 The framers of Indian constitution defined the term state under Article 12 as a union of the state government and union government, the parliament and state legislatures and all local or other authorities within the territory of India or under the control of Government of India.

All citizens of India shall have the right-

In context of recent controversies among educational institutions and government of India regarding freedom of speech and nationalism, it is better to get acquainted with the provisions provided under IPC Section-124A which defines sedition in wide, elaborative terms, and punishes the act with life imprisonment.

Explanation 1—The expression disaffection includes disloyalty and all feelings of enmity.

Explanation 2—Comments expressing disapprobation of the measures of the Government with a view to obtain their alteration by lawful means, without exciting or attempting to excite hatred, contempt or disaffection, do not constitute an offence under this section.

Explanation 3—Comments expressing disapprobation of the administrative or other action of the Government without exciting or attempting to excite hatred, contempt or disaffection, do not constitute an offence under this section.

The offence of sedition under section 124A is the doing of certain acts which would bring the Government established by law in India into hatred or contempt, or create disaffection against it; Bilal Ahmed Kaloo v. State of Andhra Pradesh, (1997) Supreme Today 127.

None of the section of the constitution of India defines the word Sedition. IPC Section 124A only expresses the offence of sedition and has always been used to suppress the voice of the citizens of India. Since the time of British rule over India, the section 124A acted as a nuclear weapon to establish the colonial rule. Mahatma Gandhi in 1922 when prosecuted under IPC section 124–A termed it as the prince among the political sections of the IPC which is designed to suppress the liberty of the citizen.

The latest imposition of section 124A of IPC is the disgraceful attack on the basic fundamental right of citizens of Indian State i.e., Right to speech and reminds us of the absolute degeneracy of some of the laws of colonial rule. The latest act points out the government’s constant efforts at suppressing every form of disagreement with intense clarity.