NEW ERA OF ‘FREEDOM OF SPEECH’

No Democracy can sustain without giving voice to the voiceless.Restricting the freedom of speech is the manifestation of tyranny.In a democracy we should consider all the voices notwithstanding its unpopularity,as a apart of discussion.

In a landmark judgment upholding freedom of speech, the Supreme Court struck down a provision in the cyber law which provides power to arrest a person for posting allegedly “offensive” content on websites.The supreme court explains that the section 66A would have chilling effect on the freedom of speech under article 19(2) of the constitution. 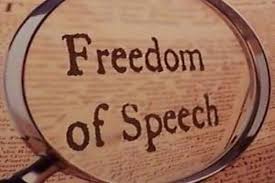 Section 66A of the Information Technology Act

The Information Technology Act, 2000 was ammended in 2008. The amended Act which received the assent of the President on February 5, 2009, contains section 66A. Provisions under this act are as follow:

Any person who sends, by means of a computer resource or a communication device,—

(a) any information that is grossly offensive or has menacing character; or

(b) any information which he knows to be false, but for the purpose of causing annoyance, inconvenience, danger, obstruction, insult, injury, criminal intimidation, enmity, hatred or ill will, persistently by making use of such computer resource or a communication device,

(c) any electronic mail or electronic mail message for the purpose of causing annoyance or inconvenience or to deceive or to mislead the addressee or recipient about the origin of such messages,

shall be punishable with imprisonment for a term which may extend to three years and with fine.

The supreme court held that Section 66A of the Information Technology Act is unconstitutional in its entirety.“It is clear that Section 66A arbitrarily, excessively and disproportionately invades the right of free speech and upsets the balance between such right and the reasonable restrictions that may be imposed on such right,” said a Bench of Justices J. Chelameswar and Rohinton F. Nariman.

The definition of offences under the provision was “open-ended and undefined”, it said.Three concepts fundamental in understanding the reach of this right were discussion, advocacy and incitement. Discussion, or even advocacy, of a particular cause, no matter how unpopular it was, was at the heart of the right to free speech and it was only when such discussion or advocacy reached the level of incitement that it could be curbed on the ground of causing public disorder.The court pointed out that a penal law would be void on the grounds of vagueness if it failed to define the criminal offence with sufficient definiteness. “Ordinary people should be able to understand what conduct is prohibited and what is permitted. Also, those who administer the law must know what offence has been committed so that arbitrary and discriminatory enforcement of the law does not take place,” the court said.

Hailing the Supreme Court’s decision to strike down the controversial Section 66A of the IT Act, Shreya Singhal, one of the petitioners in the case,  said that no one would fear expressing their opinions online anymore.

In its 2013 judgwmwnt the apex court held that the person ,accused of posting objectionable comments on social networking sites can not be arrested without police getting permission from senior officers like IG or DGP.