In this article I would like to discuss about classification of optical fibres, some important terms related to them and their demerits.

For an optical fibre to perform better its classification is utmost needed so as to understand which type of fibre should be employed. A mode can be defined as the direction which are allowed and associated with those angles at which the two essential conditions i.e., total internal refraction and constructive interference are satisfied. Based on number of modes of propagation of light rays optical fibres are classified into two categories. These are:

Single mode fibre has very small core diameter as compared to the diameter of clad so that only one mode of light wave will propagate through it. It is mainly fabricated for longer transmission distances, which makes it ideal for long-distance communication network and multi-channel television broadcast systems.

In case of multi-mode optical fibres more than one mode of propagation are allowed. The radius of the core is quite larger which makes it efficient to transmit optical power and facilitate the end to end connection of similar powers.

Multi-mode fibre is specially fabricated for short broadcasting distances. It is most suited for LAN systems and video surveillance. Multimode fibres are further classified into two categories i.e.,

The refractive index of step-index fibre changes in a step fashion from the centre of the fibre, the core, to the outer shell, the cladding. The light rays propagating through it are in the form of meridional rays which passes through the axis of the optical fibre during every reflection at the core–cladding boundary and are propagating in a zig-zag manner. This zig-zag manner spreads out the pulse which is an aggregate of different modes. This type of fibre is best suited for transmission over short distances.

Graded–Index optical fibres are so fabricated such that the refractive index of core varies as we shift from the centre. The variation of refractive index is parabolic in nature being maximum at the centre. It is because of this graded-index that light propagates helically instead of zig-zag manner which reduces its distance to travel. This reduced path enhances the speed of light at the edges and as a result the data is received to the receiver without any time delay and suffers less dispersion. This type of fibre is best suited for local-area networks.

The maximum angle of incidence of light rays striking the core of the optical fibre so as to be guided by the core. It is denoted by θa.

Light collecting ability of an optical fibre is known as its Numerical Aperture (NA). It can also be defined as the sine of acceptance angle in air or vacuum. It is given by,

Acceptance cone is the three-dimensional representation of acceptance angle. Within this cone, an optical signal can be injected into the fibre core which will remain in the core and performing total internal reflection. 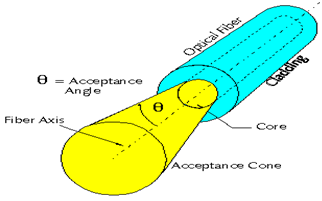 It is a normalised frequency parameter, which evaluates the number of modes of a step-index fibre. Mathematically it is given by,

ω is angular frequency of the mode

λ is the wavelength of light in vacuum,

a is the radius of core and

NA is the numerical aperture

There is a famous saying that there are always two sides of a coin. Optical fibres are nowadays have become the most reliable source for fastest and safest communications but it also constitutes some serious disadvantages. Manufacturing of optical fibres is quite expensive. They are more delicate than conventional wires. They can be affected by chemicals in case of wear and tear. Moreover, they require special skills and instrumentation for their manufacturing.

But all these demerits are generally ignored as per the growing need of fast communication in much efficient way and optical fibres have made the world totally dependent on it.