The General Studies-3 Paper of 2014 was a big surprise for the aspirant community as UPSC reduced the total number of questions, thereby increasing the individual weightage of each question. This came as both good and bad thing, as it gave an opportunity to secure more marks from each question, but at the same time, it also implied that a blunder in any question would be more dangerous.

Nevertheless, here is a component wise analysis of the paper: 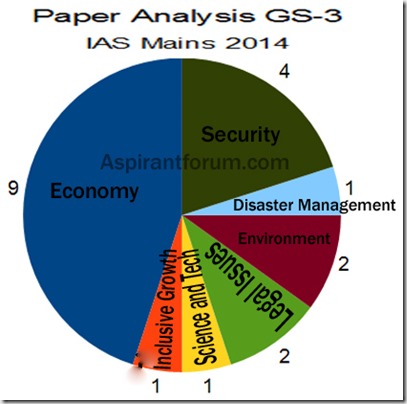 Economy constituted a biggest part of the GS-3 paper. However, the questions were generally from the traditional areas.

Question 1 directly asked about sectors of Indian economy, and from the theory of economic transition. The question was easily available in different books, and could be attempted easily.

Question 3 was on APMC. The topic of APMC has been often debated due to their positive and negative impacts on the agricultural markets. Here, you are supposed to write why, and how, the state APMC Acts are acting as an obstacle in the development of organised agricultural markets. You are required to specifically focus on the demerits and problems of the state APMC Acts.

Question 4 requires the aspirants to write and analyse about the agricultural credit mechanism and the problems associated with them. Here, you are specifically required to discuss the impact of the cooperative societies, and the challenges before the other financial institutions.

Question 5 directly asks about the Right to Fair Compensation in Land Acquisition and related topics. These topics have been in news in recent times. A good source of information for this topic would be the newspapers. This question simply asks you to link the aspects of this Act with the sectors of industry and agriculture.

Question 7 took the topic of Public Private Partnership (which was also taken in the 2013 paper). This question appears to be tricky, but is simple. The unsustainability of the Long gestation period of the PPP projects imply that the public agencies might stand to loose in such projects. By going into the longer term, the returns are increasingly appropriated by the private partners, rather than the public agency. This turns out as an unsustainable approach.

Question 8 discusses the National Urban Transport Policy and the principle of ‘moving people’ instead of ‘moving vehicles’. This concepts hints towards the improvement of the modern public transports and optimal utilisation of the transport system. You could incorporate a number of innovative points under this question.

Question 9 was directly taken from the current affairs. The issue of FDI in Defense sector has been in news for some time. You could write the different points on merits and demerits on FDI in defense, and it’s influence on the economy and security of the country. But, be careful while writing the short-term and long-term impacts.

Question 10 is an interesting one. It asks for a critical comment on the education system in India. It is a fact that a number of professional courses have been in vogue, as compared to the disciplines of research and study. This might facilitate a short-term gain for the economy, but could create some impediments for the long-term development. You are also required to write about the changing nature of the Indian universities.

Question 12 was a simple one. It simply asked about the Copyrights, Patents and Trade Secrets. Please note that since the questions asks you to distinguish between these terms, you are supposed to write about the in comparison to each other. This question could be expected, given the number of negotiations in recent times on such topics.

Question 17 is based on the concept of ‘Airspace’. Many of us keep reading about EEZ and National-waters, but UPSC asked about airspace. This question had two parts- one static, asking about the simple meaning and explanation of the topics and second, application based, asking about the security concerns associated with it.

Question 13 asks about the Carbon Credit mechanism of the UNFCCC, and it’s implications for India’s interest. You are supposed to evaluate the use of the carbon credits in the context of the falling value of these and the ultimate goals of sustainable development. Since most of the initiatives of the UNFCCC have been failing, the question also asks you to justify India’s activism in such project.

Question 15 was on the Environmental Impact Assessment (EIA), but in particular context of the coal-fired thermal plants. Here, it is important to mention the inter-linkages of the different projects on the environment. you could also mention the problems that are associated with such thermal projects. Use of some examples would be an added advantage.

Question 14 asks about the mechanisms for preparedness to deal with phenomenon of El Nino and La Nina. However, the question makes a specific reference to the NDMA guidelines of September 2010. The topic of El Nino was in news in the recent months. Thus, a regular reading habit of newspapers is helpful for such questions.

Question 16 asks about the connection and linkages between the diversity in India and the security concerns in the neighbourhood. You could write n-number of points in this question. But, write precisely and accurately, as you might run ahead of the worlimit.

Question 18 and 19 were also based on illegal migration and maritime threats. These issues have been in news in recent times. You could write about India’s experience with it’s neighbours and the examples of security attacks.

Question 20 was based on International relations and their impact on India’s security. Lately, there have been several developments in the Sino-Pak relations, which pose a potential threat to Indian interest. An awareness of current affairs is beneficial in this case.

So, What was the difficulty level?