Towards World War I

The First World War broke out with the declaration of war by Austria-Hungary, on July 28, 1914, upon Serbia. The World War was fought between- the Allied Powers, consisting originally of France, Britain and Russia, and the Central Powers, consisting of Austria-Hungary, Germany and the Turkish Empire. Italy joined the Allied powers in 1915; while the USA joined the Allied powers in April 1917. Also, after the Bolshevik Revolution in November 1917, Russia withdrew from the war.

19th Century International Relations are described as a combination of nationalism, economic imperialism and balance of power. Economic Imperialism was more an outcome of ultra-nationalism, industrial revolution and capitalism.

No country wanted any other nation to become too powerful. This was prevented by either individual or collective state action. This also gave way to the formation of the power blocks and military alliances.

The period during 1870-1914 is referred to as the Period of Armed Peace. It was characterized by growth of mutual distrust and an increasing armament. After the German unification, Germany became the most powerful nation in Europe. Russia and Austria-Hungary also became prominent powers. Britain, on the other hand, was busy with overseas imperialism. Bismarck, the undisputed leader of Germany, started diplomacy with Russia and Austria-Hungary, who were arch rivals of each other, over their claims in the Balkans.

In 1872, The League of Three Emperors, or Dreikaiserbund, was formed with Germany, Russia and Austria-Hungary, as a loose alliance. It provided that Russia and Austria would refrain themselves from acting against each others’ interest in the Balkans. The group was a scheme of Bismarck to protect Germany against France.

Meanwhile, the Turkish Empire was witnessing a number of revolts from the European subjects. The Turkish Empire was ruled by a Sultan, who was seen as the religious head of the Muslims. However, the East European Christian population resented this rule. The numerous revolts led to the weakening of the Empire. Thus, Russia declared a war against Turkey in 1877. After defeating Turkey, Russia imposed the Treaty of San Stephano, giving direct gains to herself and to a number of smaller Balkan states.

Britain was getting apprehensive about the growing influence of Russia. Austria-Hungary also demanded convening of a Congress of all European nations to draft a fresh peace treaty with Turkey. But Russia opposed it, as it would go against her interest. However, Bismarck supported Austria’s claim.

Therefore, Congress of Berlin met in Germany in July 1878, under the leadership of Bismarck. Under the Congress, Russia lost some of its gained territory. Serbia, Montenegro, Rumania and Bulgaria were given full independence. And, parts of Bulgaria and Macedonia were restored to the Turkish Empire. Russia remained dissatisfied, and Austria-Russo relations remained strained.

Bismarck feared Russian attack on Austria. Thus, he adopted a policy of alliance, and entered into a secret alliance with Austria-Hungary. It provided for assisting in case of Russian attack. It meant to maintain the status quo and Austro-German friendship.

Bismarck also convened a fresh League of Three Emperors in 1881, with Germany, Russia and Austria-Hungary. It was agreed that in case, any of the three powers were engaged in war with a fourth power, the other two would remain neutral.

However, Russia was interested in Bulgaria, and developed serious differences with Austria over Bulgaria. Thus, Russia withdrew from the League of Emperors in 1887.

Triple Alliance emerged in the background of the search of Italy for security and alliance, against the differences with France. Thus, on May 20, 1882, Italy entered into a Triple Alliance with Germany and Austria-Hungary. The terms of the alliance, however, were kept secret. Austria and Germany assured Italy to come to the assistance in the event of French aggression.

It was specifically provided that, nothing in this treaty would be directed against Great Britain, and in case a war with a power other than France and one of the three signatories is fought, the other two countries would observe benevolent neutrality. This treaty lasted till the outbreak of the First World War. 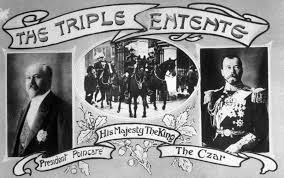 It emerged as a reply to the Triple Alliance. However, it was not formed through a single treaty. Rather it was a product of three different treaties between different countries. Triple Entente consisted of- France, Britain and Russia.

In March 1888, Emperor William-I of Germany died. He was replaced by William II, who was an impatient monarch. He dismissed Bismarck in 1890, thereby ending the period of Bismarck’s domination over the international relations. Germany refused to renew the reinsurance treaty with Russia, which compelled Russia to search for allies. In such circumstances, France became the first and natural ally of Russia. In 1894, a military alliance between France and Russia provided for mutual assistance in case of attack by Germany or its allies.

Britain, initially, followed a policy of isolation. But this became difficult under the hard attitude of Kaiser William II of Germany. Thus, Britain was forced to make an alliance with France. In 1904, Entente Cordiale was agreed between France and England. France allowed Britain a free hand in Egypt, while Britain gave France a free hand in Morocco.

Britain and Russia came to the negotiating tables under the perceived threat from Germany. Thus, in 1907 they signed an Entente whereby they promised to abstain from interfering in the internal affairs of Tibet. Russia accepted to allow British Protectorate in Afghanistan. Iran was also divided into sphere of influence.

This alliance emerged in the background of the 1894-95 Sino-Japanese War, where Japan came to control some parts of China. However, Russia objected to it and compelled Japan to return the gains. Japan wanted to take revenge of this insult, but needed an ally. During this time, there were certain differences between Russia and Britain. Thus, Japan and Britain signed an alliance in 1902.

According to it, if any one of them is involved in war, while protecting their special interest in China and Korea, the other would observe neutrality. But, if the ally of the enemy helped, than the other ally would immediately come to support. This treaty prevented France from interfering into the Russo-Japanese War in 1905. Ironically, Japan defeated Russia.

These were under the Turkish empire. However, Austria-Hungary annexed them without any provocation in 1908. Serbia resented this action as these provinces belonged to her. Since Austria had violated the Berlin Settlement, France and Russia also resented this action.

Austria gave Serbia a 48 hours ultimatum, on July 26, 1914, demanding all anti-Austrian propaganda to be stopped; prosecution of Serbian officials, involved in the assassination; permission to Austrian officials to visit Serbia to coordinate with the persecution process; and dissolution of all terrorist organizations.

Meanwhile, Russia had assured Serbia of assistance, in case of any aggression. Thus, Serbia did not bow down. This led Austria to declare a war on Serbia on July 28, 1914, marking the beginning of the World War. Russia declared war on July 30, 1914. While Germany, after giving a 12 hour ultimatum to Russia, declared war on Russia on August 1, 1914; and on France on August 3. Germany also invaded Belgium on its way to France. Britain, on the other hand, entered the war to protect Belgium.

Serbia, Bulgaria and Greece constituted the Balkan League. They declared war against Turkey in the winters of 1912, taking advantage of the Italy-Turkey conflict. Turkey suffered heavy losses during 1912-1913. The First Balkan War ended with the signing of the Treaty of London on May 30, 1913. This treaty freed almost all East European territories. Large part was given to the Balkan League.

However, there were certain problems within the Balkan League, regarding the distribution of the territories. Bulgaria tried to attain a dominant position, and waged an aggression on Serbia on June 29, 1913. This led to the Second Balkan War, wherein Greece, Turkey and Rumania supported Serbia. Thus, Bulgaria lost badly. A peace treaty was signed in August 1913. Bulgaria had to compromise with large parts of its territories.

Through this war, Serbia emerged as a powerful state. Serbia became more hostile towards Austria. Even Austria looked forward to having war with Serbia, in order to establish her supremacy.