‘If there is to be a revolution ,there must be a revolutionary party’ said Mao and this is exactly the principle on which CPI(M) in India was formed.The term ‘Naxal’ traces its origin from a village named ‘Naxalbari'(now in Nepal) where tribals took up arms against oppression of the landlords . This was in the year of 1967.

When they first started out their aim was to arouse the peasant masses in the countryside to wage guerrilla war, bring about agrarian revolution , build the rural base.(Put it like that , they don’t seem very unreasonable ; do they? But the ways they have adopted ,like killing ,kidnapping are offensive )

How do they operate? 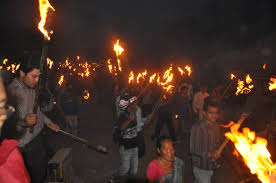 Naxalites operate in a vacuum created by political and administrative inadequacy . They appeal to the local people who are dissatisfied with the exploitation of the system and offer them an alternative or say parallel government which is supposed to be a sure shot way of justice, atleast they appear to be!!

The severely affected areas of India are known as ‘Red Corridor’, It is situated in the eastern part of the nation across the states of Andhra Pradesh, Bihar, Chattisgarh, Jharkhand, Madhya Pradesh, Odisha, Telangana,Uttar Pradesh and West Bengal.(23 districts at the moment).

Steps taken by the Government

The ’14 point policy’ tops the list of effective steps taken by the Government to counter this extremist group. This was unveiled by the Government in 2006 and it stresses the state to adopt collective approach and makes it clear that there will be no peace dialogue by the affected state with the naxal groups unless the latter agree to give up violence and arms. Political parties are also expected to strengthen their bases in these affected areas.

Modernisation of the State police, revision of security-related expenditure, supply of mine protected vehicles, long-term deployment of Central Para-Military Forces, deployment of Sashastra Seema Bal along the Indo-Nepal border(given that Nepal also has a very strong Maoist movement) are few other steps that could count.

I am sure you agree along with me  that Government’s reach to people is way better than any terrorist/insurgent group ever can have. So the Government must make right use of it and obviously lay more emphasis on welfare of tribals.

‘Salwa Judum’ was a unique way to stand up to Naxalism , untill Supreme Court declared it illegal in 2011.While we are at it ‘Salwa Judum’ was a part of anti-naxalism movement that comprised of local youth from the state and who were given training by state government nevertheless.

So which is the best way to resolve the problem of Naxalism completely in India; only time will tell. What do you say?