The imperialist occupation of China began with the Opium Wars. Before these wars, only two Chinese ports were open for foreign trade. China was already a prosperous civilization, which had invented paper, printing and gunpowder. There was no need for British goods in China. Thus, British had to pay in gold and silver for the goods imported from China. To cover up their costs of imports, British merchants began smuggling opium from India to China.

In India, the EIC (East India Company) had a monopoly of the opium cultivation. But there was a ban on opium in China. Therefore, the EIC traders used the private traders, licensed by the company, to take opium from India to China. These traders sold opium to smugglers along the Chinese coast for gold and silver. The EIC used this gold and silver to repurchase the goods from China, thus making profits. This illegal trade did immense physical and moral damage to the Chinese.

The First Opium War took place when the Chinese government caught an opium wagon and destroyed it. It response, the EIC waged war on China and defeated the latter. The war resulted in the Treaty of Nanking, whereby- China was forced to pay fines to British for war damages; Hong Kong was given to Britain; China had to open 5 port cities to the British traders; and Chinese government was no longer free to impose tariffs on the foreign goods. Another rule was introduced that provided that- the British subjects in China were answerable only to the British laws, even in disputes with Chinese.

Another clause was added that- whenever any nation got new privileges from China, those privileges were automatically extended to Britain as well.

Soon, Britain, along with France, fought another war against China, on the pretext that a French missionary had been murdered. This war is known as the Second Opium War, or Arrow War. It resulted in the Treaty of Tianjin, whereby- freedom of movement for Christian missionaries was provided; residence in Beijing for foreign envoys; opening of several new ports for Western trade and residence; right to travel, of foreigners, in the interior of China; China was forced to grant even more privileges to the victor nations. 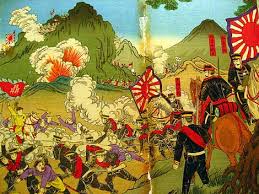 Korea had been traditionally a tributary of China. However, Japan wanted to increase its influence over Korea, because it was strategically located opposite the Japanese islands, and had reserves of iron and coal. This led to a War between Japan and China. Surprisingly, Japan emerged victorious, due to its western military technology.

As a result, China had to recognize Korea as an independent state. China also had to give away Formosa, Taiwan and parts of South Manchuria to Japan, along with 150 Million Dollars for war damages.

China did not have enough cash to pay Japan. Therefore, France, Russia, Britain and Germany agreed to give loans to China. But, in return, these countries divided China into ‘sphere of influence‘. Each western country had certain regions of China reserved exclusively for its purpose only. This division of China into spheres of influence has been often described as the Cutting of the Chinese Melon.

After the economic depression of 1890s, US needed foreign trade to boost its economy. In China, the American textile manufacturers had found markets for cheap cotton goods. But US feared that China would fall under the effects of the sphere of influences. Therefore, US suggested the policy known as- Open Door Policy or Me Too Policy.

According to this policy, all countries would have equal rights to make trade anywhere in China. Britain supported US in this policy, hoping that it would discourage the annexation of China by Japan or Russia. Chinese people were unhappy with the economic exploitation by the western powers; the extraterritorial rights granted to the foreigners; China’s humiliating defeats in the Opium wars and against Japan; with growing corruption and inefficiency of their royal government; and the work of Christian missionaries. All these resentments led to formation of a secret organization known as Yihetuan, or the Society of Righteousness and Harmony. The foreigners called them ‘Boxers‘.

Boxers blamed the foreigners for all the ills in China. Thus, they started seizing and destroying the properties of foreigners, Christian missionaries and Chinese converts. The movement took form of a violent rebellion. The Boxers were officially denounced by the royal court. The British, French, Japanese, Russian, Germans and Americans sent their troops to curb this rebellion. Ultimately, the might of the western powers crushed the rebellion.

After the suppression of the rebellion, China was made to pay fines for a period of 40 years; more trade concessions; and right of the foreign powers to station their troops in Beijing. After the failure of the Boxer rebellion, Imperialism continued with the cooperation from Chinese warlords. Within a few decades, China had been reduced to a status of an international colony.

However, the nature of imperialism in China was very different from colonies at other places. First, there was indirect control over the politics, economy and society, which created a kind of semi–colonization, different from the one prevailing in India/Africa. Second, no single imperial power had a monopoly of control in China. China was being simultaneously exploited by many powers.

One response to “Colonization of China”