Radhakrishnan believed that human beings are by nature value seekers. They seek truth, beauty and goodness. For him, ethical principles are unconditional commands, guiding man towards a self realization. The awareness and understanding of the mystery of life can be gained only through ethics, religion and philosophy. Moral values are a necessity for the development of personality. He saw non-violence, renunciation and suffering as the cardinal principles of human life.

To the Indian mind, philosophy is essentially practical, dealing with the fundamental concerns of human beings. We contemplate the world as a part of it. The present anarchy of the world is attributable only to the human mind. The anxiety in our mind gives rise to the chaos in the world. Mere scientific advancement cannot solve our human problems.

Radhakrishnan gave a spiritual interpretation to the modern theory of evolution. The growth of human beings have led to their spiritual development. The human self is conscious of its limitations and purpose. He believed that the existence of the soul can be proved through our spiritual consciousness. However, the noble men are better able to listen to voice of this inner self. But, misuse of our rational faculties can lead to a deterioration of our spiritual self. This human spirit develops through love and worship. That is why, all the religions emphasize on the element of love and worship.

He believed that humans exist in the world for a higher cause. Hindu thought has laid a belief in the power of the human mind. It puts faith in the capability of human beings. The idealist tradition has always asserted the supremacy of the spirit in humans. This spirituality is essential to the dignity and identity of the man. It is the source of our values and principles. The values bind the individual in a harmonious relationship with the society.

Radhakrishnan also believed that a training is necessary to direct our mental vision to the right objects. He carefully mentions that intuition should not be confused with anti-intellectualism. Intuition which ignores the intellect is useless. The two are deeply interlinked.

Human nature changes in two ways: First, there are natural and mechanical changes which are inevitable. Second, there are ethical and spiritual changes which are linked to our conscience. Morality enables a person to rise above to a higher level. His conception of religion transcends the religious dogmas. It is more of a universal religion, fulfilling the aspirations of humanity. Radhakrishnan’s philosophy is the philosophy of growth and progress of human’s spiritual personality. Our total liberation is possible only when we are truly free.

Development of our moral nature can be ensured only by loving other fellow beings. One should control the ego. This is the foundation of all ethical process. A moral person follows his inner spirit, and not his external senses. Our destiny is to expand our humanity, and make it more spiritual and understanding. Matter, life and mind evolve only when their respective conditions are met. 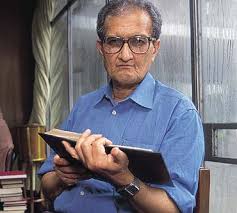 Amartya Sen gave the world a new idea by arguing that people’s development should be evaluated on the basis of their capability to achieve something. This approach came to be known as the Capability Approach. It consists of two things- Functioning, which refers to the number of doings and beings that a person manages to achieve in life; and Capabilities, which refers to the extent of freedom that a person has in order to achieve different functioning. Thus, a person can achieve something, only when he is capable to achieve it. It is a freedom centric approach, which focuses on developing an individual’s capability, rather than providing him with mere resources to live.

The Capability Approach differs from the other contemporary approaches of- Utilitarianism and Liberalism. Utilitarianism is based on the principle of ‘greatest good of the greatest number’. Thus giving importance to the quantitative aspects, at times at the cost of the qualitative ones. Liberalism, on the other hand, finds expression in the writings of John Rawls, and believes in the principle of the inviolable rights of every being. It believes that civil and political rights need to be given a priority over other concerns, and trying to achieve a balance between the concerns of efficiency and justice.

Sen believes that these theories are limited, as they does not address the concerns of human capabilities. It fails in addressing the questions of diversity among the human beings.

One response to “Lessons from Life of Indian Thinkers: S. Radhakrishnan and Amartya Sen”