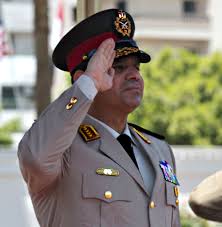 The new Egyptian President- Abdel Fattah al-Sisi was the Army chief and Defense Minister of Egypt, before ascending to the highest position of the nation. In a landmark victory, he secured about 96.91% of the votes polled for the presidential elections.

Since Egypt became a Republic in 1953, Al-Sisi is the 6th President of Egypt, and 5th with a military background. The only non-military President was Mohammad Morsi, the leader of the Muslim Brotherhood, who is now behind bars.

The election of Al-Sisi is a partial continuation of the turbulence in the Egypt’s polity, which started in 2011 with the overthrow of Mr. Hosni Mubarakh’s 30 year old regime. Thereafter, Morsi was elected as President in June 2012, and again removed in July 2013, through a even bigger uprising.

The victory of al-Sisi was expected, for his reputation during the anti-Morsi campaigns. He further earned a reputation of a strong leader when he serve Morsi an ultimatum to resign in 48 hours. He also led a crackdown on the Muslim Brotherhood protestors and Morsi supporters in Cairo and other places, in which about 1000 Morsi supporters were killed. Al-Sisi also acted as the de facto ruler after the removal of Morsi and before the adoption of the new constitution. He vowed to eliminate the Muslim Brotherhood from its existence.

However, though peace has again made home in Egypt, the recent events has shown that the Egyptian democracy is a military-guided one. It is run by a military rule, under a civilian garb. The masses of Egypt are secular-minded and prefer peace and stability over religion. Thus, we supported a military leaders who could be tough on Islamism but is not against Islam itself. Thus, people also responded the nationalistic call of Al-Sisi, instead of the call towards Islamic internationalism given by the Brotherhood.