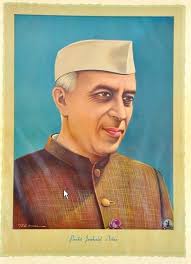 Jawaharlal Nehru has been hailed as one of the chief architects of the modern Indian state. Nehru was a great statesman and an idealist. He never vowed before the conservative forces, that tried to obstruct the development of the nation. However, unlike Gandhi, he did not put the concept of spirituality at the centre of his concern. But, his ideas remained equally humane, rational and this-worldly. He stood against the forces of communalism, casteism, landlordism and religious taboos. His accommodating attitude guided the infant Indian state through the most challenging phases.

Gandhi, Tagore and Nehru are the trinity, representing the modern India. The concept of humanism passed through them. Nehru placed less value to the spiritual ideas, but gave the utmost importance to service to the man. Nehru respected and cherished the rational and noble part of the man. Thus humanism was effectively synthesized with a scientific spirit of the modern age.

The purpose of the state, government and any authority, wielding power, is to serve the man.

Nehru is seen as the product of the Indian Renaissance. He was a child of his time. His perspective was such that he was opposed to all forms of obscurantism, medievalism, communalism and sectarianism. Nehru is a stalwart of the modern ideas in India. In the wake of growing communalism and religious orthodoxy, Nehru cultivated a mature sense of secularism, and guided the Indian state on a secular course.

He was deeply influenced by Mahatma Gandhi. Thus, while cherishing the ideals of industrial and scientific development, we upheld the principle of purity of the ends.

He believed that democracy, secularism and socialism were deeply linked. Thus, he became an advocate of socialistic ideas. In order to enable India to compete with the rapidly advancing world, he saw an urgent need to enhance the capability of the state and society. It is only when the individual has a sense of self-respect and dignity, that the society is better able to advance the moral-ethical goals. For this, equality of status and opportunity are the basic principles.

Nehru recognized the long tradition of religious tolerance in the Indian tradition. Nationalism and Patriotism cannot thrive without a secular perspective. Thus, India needs to be secular in orientation. For him, a secular state does not imply people’s alienation from religion. Rather, it is a positive concept where, the state stands to protect different religions, while not favoring any particular one. In such a framework, the state does not link itself to any particular religion.

Nehru recognized that Communalism is a much bigger enemy than any of other threats. Communalism enters our society and minds, creating permanent barriers. This divides our society, ultimately leading to its disintegration. Thus, Nehru’s concept of secularism means tolerance, co-existence and understanding. Secularism, for him, was a basic ingredient for nation-building.

Nehru also attached great significance to science and technology. The influence of socialist ideas on him was manifest on him, through his admiration of the process of industrial development. He referred to the dams as the ‘modern temples for nation-building’.

Nehru analyzed the essence of culture in terms of inner growth; behaviour towards others; capacity to understand other; and the capacity to make oneself understood. A good culture is always open to the ideas and views of the others. Like Gandhi, Nehru too believed that it is not possible to have the knowledge of the absolute truth. Thus, a culture shall always try to expand its realm of knowledge. Thus, Nehru wanted to facilitate an open interaction between different cultures.