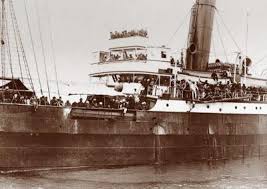 The most striking aspect of the 376 Indians who were part of the Komagata Maru adventure was the bravery they exhibited, their unwavering commitment in keeping afloat the pride of their country and vastly influencing inter-continental movement of mankind. The story of the Komagata Maru resonates beyond 1914, linking to freedom movement in India and the right to vote for South Asians in Canada. Their stand echoes all men and women everywhere who oppose exclusion and domination on grounds of race, colour and origin.

Komagata Maru incident was a very significant event in the history of Indian revolutionary movement. This was the voyage of Komagata Maru, which though inspired by the doctrine of the Ghadar party indirectly gave a fillip to the Indian struggle for freedom. Indians had been migrating to Canada and U.S.A from the early years of 20th century, but their growing numbers in Canada was resented by the Canadian Government. As a result they, with the approval of the British Government, passed a series of immigration laws restricting the entry of Indians into Canada. An Ordinance made it mandatory for the passengers to come only direct from India and that they should have a minimum of 200 Canadian dollars in their possession at the time of landing. These restrictions, though quite unjustified, were enacted within the legal framework.

In the back ground on rising nationalism in India , an Indian patriot, Baba Gurdit Singh, a Sikh businessman operating from Singapore, decided to travel to Canada in order to create a larger network of Indians that could support the nationalists in India and abroad. So he charted a Japanese ship named Komagata Maru to sail from Hong Kong to Japan and finish the journey at Vancouver, Canada. It carried 376 passengers and reached Vancouver on 23rd May, 1914. When Komagata Maru was not allowed to dock at Vancouver and the immigrants were refused permission to land “as they had failed to comply with the requirements of the Canadian Law”. The ship was turned around and forced to depart on 23 July 1914 for India.  On 29th September, 1914 Komagata Maru returned  to India and on reaching Calcutta  when the ship was docked at Budge Budge harbour, the police ordered the arrest of Baba Gurdit Singh and the 20 other men that they saw as leaders.

A passenger on Komagata Maru told a British officer: “This ship belongs to the whole of India. This is the symbol of honour of India and if it will be detained, there will be a mutiny in the army”.

A renowned Ghadarite once said, “We were not Sikhs or Punjabis, our religion was patriotism”. While Baba Gurdit Singh was resisting arrest, one of his associates had an alteraction with policeman leading to a riot. The police opened fire, killing 19 unarmed and defenceless passengers. Some escaped, but the remainder were arrested and imprisoned or sent to their villages. Gurdit Singh managed to escape and lived in hiding until 1922. He was urged by Mahatma Gandhi to give himself up as a ‘true patriot’; he duly did so, and was imprisoned for five years. In word and deed, those aboard the Komagata Maru upheld the finest traditions of the freedom struggle.The Komagata Maru incident left a deep impression in the minds of Indian diaspora in Canada and the people of India.