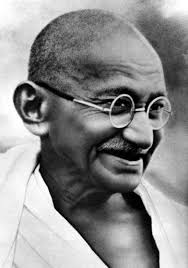 The basic principles, central to Gandhian ideology, are truth, love and non-violence. The whole universe of Gandhian perspective is based on these cardinal principles. He believed that no material advancement can benefit the human society, if it is lacking of the moral base. Such was the commitment of Gandhi, to his principles, that we faced the armed might of the English, in Africa as well as in India, with his values and principles. Never did he lost his direction.

Gandhi’s life gives us the message that even a single person can bring a revolutionary change in the society. The strength needed to bring a transformation in the society, does not come from the physical vitality, but from the inner strength. Gandhi was an exemplary of what he believed. He was not an armchair philosopher, but an agent of change. He had a mature spiritual and moral perception. He gave his ideas and experiences in his autobiography- ‘My Experiments with Truth‘. [click here to down My Experiments with Truth]

Gandhi developed such an attitude and beliefs through his life experiences. He did not base his assertions on hypothetical statements, but reinforced each of his ideas on the basis of lived experiences. He found, through his experiences, that violence is no answer to our conflicts. Human conflicts can only be resolved effectively through non-violence and deliberation. Non-violence is the only way to counter injustice and exploitation. Violence begets violence and hatred only.

Non-violence is the central principle of Gandhian philosophy. The values of humility, compassion, forgiveness and tolerance are an appendage to the principle of non-violence. He also gave the idea that leadership has to be a living example of sacrifice and spirit of service.

Gandhi gave the idea that our duty and obligation flows through a series of concentric circles. Here, we start with the fulfillment of obligations towards the nearest and dearest ones, and move towards our obligations towards the greater society. The circle lasts until we have served the entire humanity. In this way, we payback our debt to the human society.

Gandhi also mentions that the commitment to service requires a strong sense of conscience, courage and character. To walk on the path of morality is not an easy task. Leaders need to develop and follow their conscience even more than the ordinary masses, as they set the path for others. That is why, the leadership has to cultivate great courage and character, along with fearlessness, endurance and spirit of willing sacrifice.

It was only because of his inner courage and character that Gandhi wielded great influence over the masses. His appeal emerged from his services in emancipating the weaker sections, and fighting to secure them justice. The technique of satyagraha evolved as a means of struggle of the highest moral-spiritual level. Gandhi gave to the people, a sense of self-respect, purpose and empowerment.

For Gandhi, morality is inseparable from God and religion. Morality constitutes a core component of the religion. While adding the element of morality into politics, Gandhi believed that religion and politics are intertwined closely.

Gandhi also mentions the 7 grave sins, from which every person shall refrain:

It is understood in a broad sense, to imply that oneself should be completely away from actions, which may hurt others physically or mentally. Non-Violence is to bear the distress by oneself to make others happy. It is an effective means to fight against discrimination and falsehood. For Gandhi, non-violence does not imply merely physical strength. It is an internal power. This principle promotes vegetarianism and reverence to all life forms. Non-violence prevents murder, war, capital punishment and all forms of violence. When we resort to violence, we show disrespect to the inherent humanity of the other person. This degrades us morally.

The practice of non-violence calls for great courage. That is why, Gandhi mentions that, non-violence cannot be practiced by a coward. Violence is resorted to, only when a person is not able to bear the arguments against his beliefs. Thus, violence tries to shun the beliefs that are contrary to the one’s held by a person. This is a sign of weakness of character and conviction.

The Principle of Truth

Gandhi puts the greatest emphasis on truth. For him, truth is equivalent to God. Truthfulness is a virtue. However, truth, for Gandhi, can be beyond the comprehension of a single individual. Thus, the pursuit of truth is best, when done through a joint pursuit. Thus, Gandhi always gave a call to his adversaries to join him in the pursuit of truth. Every individual sees different aspects of truth. It is only through a joint pursuit that a comprehensive knowledge of truth can be attained. This is beneficial for everyone. Thus, we find a post-modernist perspective in Gandhian ideas regarding truth.

Living under ignorance is a sign of immaturity. A person of poor character does not agree to move forward from his currently held views. This impedes his moral development. For our true moral and spiritual growth, it is necessary that we constantly make efforts towards the expansion of our perception of the truth. This can only be done by cooperating with others. Living under a falsehood creates boundaries between different individuals, and obstruct our development.

However, Gandhi also mentions that truth shall be spoken in a pleasant way. Sometimes, a truth might be blunt and socially non-beneficial. Such truth need to tempered down to curb the harmful impacts on the society. Thus, truthfulness has to be practical.

Another element of Truthfulness is Non-Stealing. It implies not to take by thought, action and word anything to which one is not entitled. Thus, non-stealing, for Gandhi, is a broad concept. Gandhi’s ideas, in this regard, are influenced by Jainism. Stealing is not compatible with the virtue of love.

Gandhi believed in abstaining from excessive self-indulgence by thought, action and speech. Celibacy also means abstinence from sexual relations. Gandhi underlined the importance of sexual control. Celibacy implies putting a check and control over all the senses. Senses are the source of delusion. Generally, immorality is born out of an uncontrolled desire.

Thus, every individual must cultivate a discipline by which we are able to keep the senses under control. Gandhi emphasized upon the need to reform our food habits. An uncontrolled palate is responsible for deep urges in the human character, which often lead to uncontrolled drives. Gandhi himself experimented with a variety of food patterns, to come up with a food habit that curbs our undesirable urges. Thus, celibacy is a broad term.

The principle of non-possession has been borrowed from Jainism. This principle is also the source of the idea of- ‘live and let live’. Also, an urge to possess, more and more, is the source of different vices, like- violence, greed, hatred, stealing, and exploitation. Thus, by adhering to the principle of non-possession, we actually lay the foundation of many moral values in our character. Only a person, endowed with this principle, can carry out satyagraha and sacrifice.

All this leads to a simplification of one’s life. Such a person has the least to worry about. Gandhian idea of non-possession is seen as a major contribution to the debates of contemporary economic thought. In the present society, man’s unlimited desire is the cause of all troubles. For Gandhi, ethics cannot be separated from economics. Economics, without an ethical base, becomes an instrument of exploitation.