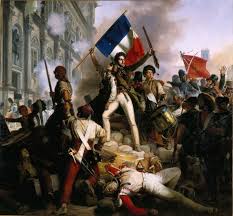 The political and social system of France before the French Revolution was known as the ‘Ancient Regime’ or the ‘Old Regime‘. French society was divided into Estates, or classes. All rights and status flowed from the social institutions, which were divided into three orders. There was no national citizenship.

The first two estates, of clergy and nobility, were the privileged classes. They were exempted from all taxes, and controlled all high-ranking posts in administration and army. These two classes owned huge estates, which gave them disproportionate shares. Many of them received liberal grants and gifts from the monarch, from time to time. Thus, life of the nobility and clergy was characterized by extravagance and luxury.

Consisted of the religious leaders, who were in charged of the Church. They constituted only 1% of the population, but controlled about 10% of the land. Their assets came from the products produced on their land, and in the form of rent from peasants. The clergy had the power to levy a 10% tax called ‘Tithe‘, which was meant to run the day to day affairs of the Church.

Constituted about 2% of the total population of France. They enjoyed the privileges of the feudal order. They extracted forced labour from the peasants, enjoyed exemption from the Taille, or the property tax; monopolized all offices in the army, navy and the church.

The rest of the population comprised the Third Estate. They were the common people and comprised about 95% of the total population of France, and formed the backbone of the country. They were the unprivileged class, but paid the largest share of the taxes. However, there were many differences in their wealth and style of living. It comprised of- the bankers, merchants, lawyers, doctors, journalists, professors, artisans, upper middle class, bourgeoisie and peasants.

The largest section of the Third Estate consisted of the Peasants, who comprised almost 80% of the total population of France. Most of the peasants were free, unlike the serfs of the middle ages. But, their lives were wretched. Many owned their own lands, but most of them were landless or had very small holdings. They could earn hardly enough for subsistence. Peasants had to pay rent to their feudal lords; tithes to the church; and taxes to the King. The plight of the tenants and share-croppers was worse. After rent, the peasants’ share was reduced to one-third or one-fourth of what he produced. Certain changes in the agriculture in the 18th century further worsened the conditions of the peasants. The burden of taxation was intolerable. Besides taxes, there was also ‘forced labor’ which had been a feudal privilege of the lord and which was more resorted to for public works.

Not all the people of the Third Estate worked on land. There were also artisans and workers, who worked in the cities and towns. There were also the middle classes and the bourgeoisie. The middle class consisted of the educated people- writers, doctors, judges, lawyers, teachers, civil servants, and the richer people who were merchants, bankers, and manufacturers.

Economically, this was the most important class. It was the forerunner of the builders of the industries which were to transform economic and social life in the 19th century. Merchant-business groups had rapidly became rich, due to the trade with french colonies in America. However, the middle class had no political rights. It had no social status and its members had to suffer many humiliations.

The condition of the city poor- workers and artisans- was inhuman in the 18th century. They were looked upon as inferior creatures without any rights. No worker could leave his job for another without the consent of his employer. They had toil for long hours, and pay heavy taxes. Thus, the oppressed workers formed many secret societies and often resorted to strikes and rebellions. This group, later, became the mainstay of the French Revolution.

At the head of the French state stood the King, an absolute monarch. Before the outbreak of the revolution, the Burbon dynasty ruled over France. Louis XVI was a man of mediocre intelligence and indifferent to work of the government. His indecisiveness and conservatism led some sections of the society to view him as a symbol of perceived tyranny. His queen squandered money on festivities and interfered in state appointments. The King was biased. The state was always faced with financial troubles. Keeping a huge army and constantly waging wars made the conditions worse, bringing the state to a state of bankruptcy.

The system of taxation in France before the revolution was grossly erroneous and regressive. It was full of discrimination, nepotism and favoritism. The inequality in taxation and its oppressiveness became one of the major causes of the revolution.

France witnessed a population explosion in the 18th century. The growth of population in France was without a simultaneous growth in the food production. This period witnessed frequent food shortages. Also, from 1787 to 1789, was a period of bad harvest. There were no appropriate arrangements by the government, to face the short shortages. This led to scarcity of food and high inflation. There was also large scale unemployment.